The House of Terror is a museum in Budapest (Hungary), which deals with the recent history of Hungary. The exhibition depicts the atrocities of the Nazi period and socialism in Hungary. Name of the museum in Hungarian: “Terror Háza”, in English simply: “House of Terror”. 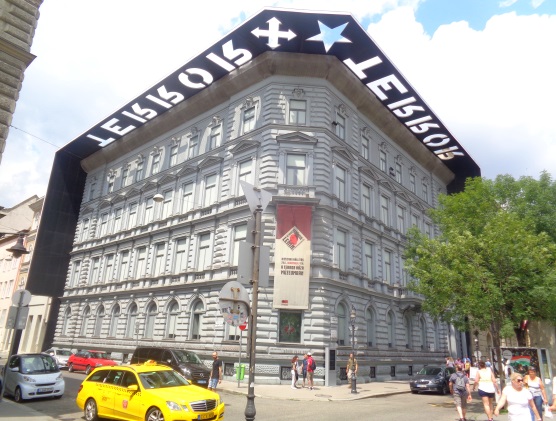 Hungary had to experience two tough dictatorships in succession. First came the Nazis and were seamlessly replaced in 1945 by the troops of the Soviet Union. Only in 1989 Hungary became a free country again. Both dictatorships were unimaginably horrible and cruel in Hungary. In the House of Terror this is relentlessly portrayed. Many historical films are shown, but also writings and objects of illustration.

The museum has a total of 20 rooms with exhibitions. On the ground floor there is a ticket office, a café and free cloakroom. On the 1st and 2nd floor is the museum “House of Terror”. There is an extract. It is a modern museum with lots of multimedia and the like. Most visitors of the House of Terror are, in our impression, tourists from the West. This could be because of the rather high entrance fees. Especially the many films in the exhibition with reports from contemporary witnesses we found very interesting. Most of the films in the House of Terror are in Hungarian and English. The films are mostly in Hungarian with English subtitles. It is a modern museum, opening was in 2002.

The joint presentation of National Socialism and Communism in one museum as 2 terror regimes has perhaps been criticized.

From the city centre, take the Metro 1, the terror exhibition is between the stations “Oktogon” and “Kodaly köröönd”. From the metro Kodaly körönd the House of Terror is a little closer, but also from the station Oktagon it is less than 200 meters to the museum.

The exhibition House of Terror costs 4000 Forint entrance fee, which is about 10 Euro (as of end of 2019). However, many people pay only half of that (1500 Forint, almost 5 Euro). This reduced entrance fee applies especially to people under 25 years, people over 62 years and families. Children under 6 years of age do not have to pay admission in Terror Haza.

The museum has classic museum opening hours, daily from 10am to 6pm, monday is closed. In addition, on some holidays is closed like November 1st, Christmas (also 24.12.), New Year’s Eve and New Year. In January the House of Terror has a whole week off.