The Parliament of Hungary is one of the largest and most beautiful parliament buildings in the world. The huge building is in the centre of Budapest, almost directly on the wide Danube. It is the most visited sight in Hungary by tourists. The parliament in Budapest can be visited in a guided tour, guided tours in German are also available. These should be booked in advance on the Internet:   >>>  On this link you can book

A tour of the Parliament is without doubt one of the highlights for visitors to Budapest. The tour is one of the 10 most popular building tours for tourists in the world, an absolute top sight in Hungary.

Already the size of the building in more than impressive. It is an incredible 286 meters long, the large dome is 95 meters high. Almost 40 million bricks were needed to build it. There are about 700 rooms in the building, many of them offices of the 199 Hungarian deputies and their employees. The corridors seem endlessly long, the 700 rooms have a total area of 18.000 m² on 4 floors. The Giga building has 27 entrances.

The Hungarian parliament was built between 1885 and 1904. It was the great time of Hungary. Also the first underground railway on the European continent in Budapest and some bridges over the Danube were built in this epoch. The architect of the grandiose parliament building for the proud Hungarian people was Imre Steindl from Budapest. Almost everything in and on the building originates from Hungary. The construction period was 19 years, at the end the architect was blinded and could not see his masterpiece anymore. On the outside, the Parliament of Budapest has a neoclassical façade, and on the inside there are also elements from the Baroque and Renaissance.

Tour for visitors through the Parliament of Hungary

At the beginning of the tour we especially noticed the beautiful gilded ceilings. One sees endless corridors with offices and other rooms. Highlights of the tour are the Parliament Hall itself as well as the Hungarian Crown (St. Stephen’s Crown) and Crown Jewels, which have been on display in the Parliament for about 20 years. The state symbols sceptre, sword and imperial orb are also on display. The huge library is more than worth seeing, the Parliamentary Library mainly has a very large collection of books about history and politics.

Also some paintings in the parliament are world-famous like “The Land Grab” by Mihaly Munkacsy. One should also have a closer look at the many statues and the gilded staircase.

The Parliament of Hungary can only be visited as part of a guided tour. These are available in different languages, about once a day also in German, mostly in the afternoon. You should book these tours in advance on the internet, because the number of participants is limited: >>> On this link you can book the guided tours through the parliament 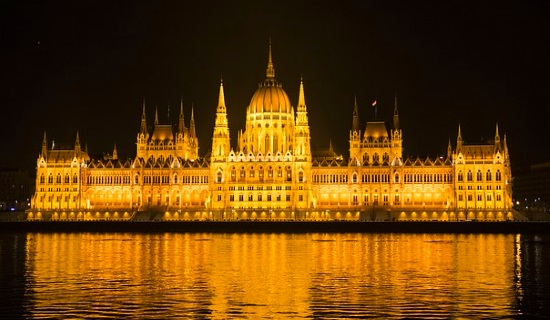 By metro (line M2) you can get off at the stop “Kossuth Lajos Ter” near the Parliament of Hungary.

On foot from the centre, you can easily walk north along the Danube. The entrance for visitors is at the back of the Parliament building, as seen from the Danube.