The Great Synagogue in Budapest is the largest synagogue in Europe and the second largest in the world. Built in the middle of the 19th century, it is now one of the biggest sights in Budapest. On some days several thousand visitors come to the synagogue in the centre of the Hungarian capital.

Buy tickets Great Synagogue in advance: As many tourists come to the synagogue, the queues at the cash desk can be very long. That’s why more and more visitors buy their tickets including a guided tour in German in advance on the Internet.  On this link (well-known website Getyourguide) you can get the tickets and more information 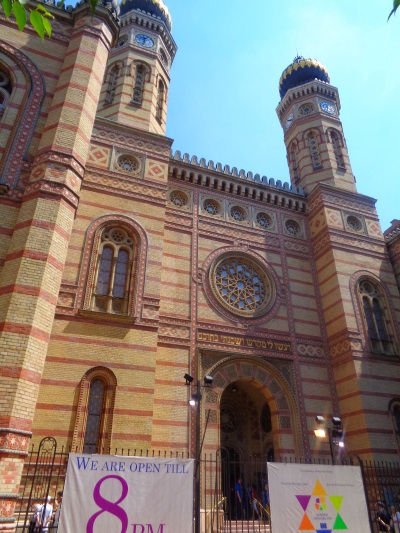 The Great Synagogue was completed in 1859, the architect was the Austrian Ludwig Förster. There are over 3000 seats in the building, more than in any other synagogue in Europe. The architectural style is mainly Moorish, the building reminds on the Alhambra in Spain. 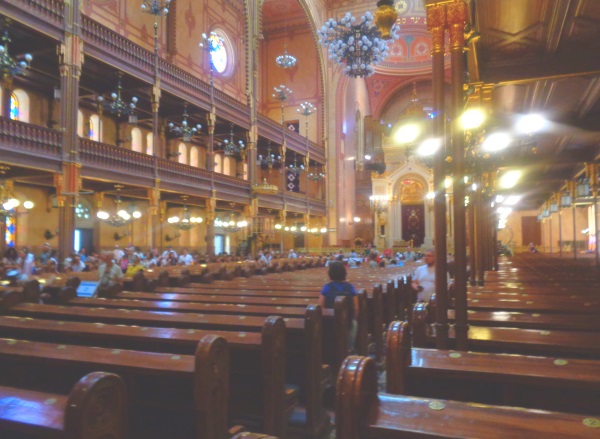 The majority of tourists in Budapest come to the synagogue. There are often queues at the ticket offices. There is only one ticket, it is valid for the whole complex including the synagogue, museums, garden etc. The entrance fee is almost 15 Euro for adults (4500 Forint).

We recommend to buy the tickets in advance on the internet at Getyourguide. Then you save the often long queues at the ticket office at the Great Synagogue in Budapest. The online ticket is valid for the synagogue, all museums and the garden with the tree of life. You can also take part in one of the many interesting guided tours in about 5 different languages for free. Guided tours in German were every hour during our visit in June 2019, in English even every half hour.

Garden of the synagogue

In the garden there are among other things graves and memorial plaques of well-known Jews. Of particular interest is the so-called tree of life made of metal (see picture). 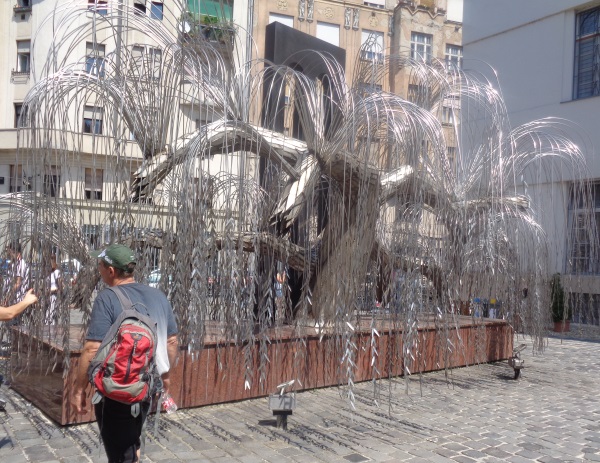 Museums in the synagogue

You can go to the Jewish Museum Budapest, which is located on the grounds of the synagogue. There is also an exhibition in the basement about the terrible events during the Nazi period in Hungary. Both museums are included when visiting the synagogue.

Buy tickets Great Synagogue in advance: As many tourists come to the synagogue, the queues at the cash desk can be very long. That’s why more and more visitors buy their tickets including a guided tour in German in advance on the Internet.  On this link (well-known website Getyourguide) you can get the tickets and more information

We recommend all visitors to the Great Synagogue of Budapest to join one of the interesting guided tours. These are included in the purchase of the ticket.

Since the queues are often long, we recommend that you buy your tickets before visiting the site on this link.

The synagogue in other languages

One often reads or hears the name “Dohány Synagogue” for the Great Synagogue of Budapest. This comes from the street name where the building is located: Dohány utca (Tobacco Street). This is why there is also the German name Tabak-Synagoge or Tabaktempel.

In English there are the names “Great Synagogue Budapest” or also ” Dohány Street Synagogue”.

In Hungarian there is “Dohány utcai zsinagóga” or “Nagy zsinagóga”.