Overview of the party location Siofok at Lake Balaton in Hungary

Siofok is currently the largest town on Lake Balaton in Hungary and is one of the major tourist resorts on Lake Balaton. It is a place for young tourists, most of them are between 18 and 25 years old. It is a party place, in summer there is a lot going on here at night. 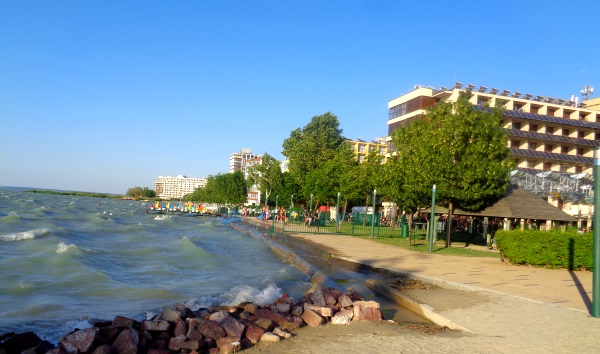 Siofok is located directly at the Balaton, in the southeast of the lake. Several kilometres of the shore in Siofok are a bathing beach. On beautiful days in summer there are many thousands of holidaymakers here. There are big hotels and many bars, pubs, clubs and restaurants in Siofok. At night it is often very loud, the music from some discos can be heard hundreds of meters away.

About 200 meters behind the shore of Siofok the railway runs. The city centre is on the other side of the railway line, seen from the shore. The train station is in the centre, there are trains to Budapest, to Deli Pu station, among others, every hour. Almost at the station is the old water tower of Siofok. It is considered the city centre. Since a few years it has been possible to take a lift up to the Siofok tower and see the city from above directly from the city centre. The former water tower is considered as the landmark of Siofok.

The nightlife is in a street parallel to the beach. The street is a kind of pedestrian zone on a section of several hundred meters. Here is the big party of Siofok, in the summertime daily from about midnight until the early morning. There are several big clubs, known among others is the Renegade (see picture). 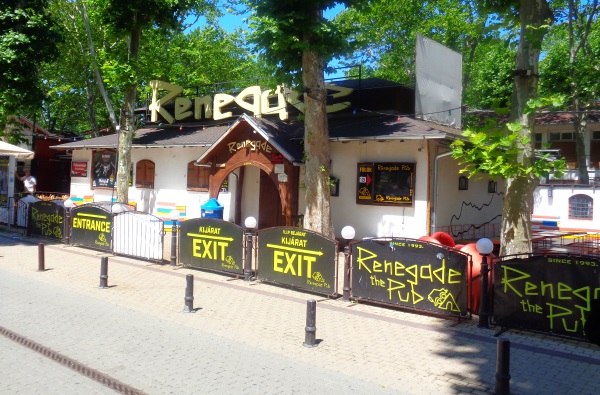 Many of the restaurants are also in the party street of Siofok near the beach. There is a lot of fast food like hamburgers, pizza and gyros.

In the center you have to pay entrance fee for the big beach of Siofok, about 3 to 4 Euro for the whole day. But many tourists also choose a public beach for free, a very big one is about 500 meters east. There are hardly any sand beaches in Siofok like at the Mediterranean Sea. There is usually a footpath behind the shore, behind it there is a lawn. Here most of the bathers lie on towels. One goes over stairs into the water (see picture). In the water there is mostly sand on the bottom. In many places you can go in hundreds of meters and still stand. Lake Balaton is very shallow in many places, especially here in the south.

There are snack bars and public restrooms throughout the beach for a small fee. You can also buy drinks at many kiosks and restaurants. The prices in Siofok are a bit higher than in the rest of Hungary, but significantly lower than in Germany or on the Mediterranean.

From Siofok there are ferries, ideal for day trips. A great destination is the health resort of Balatonfüred on the north shore of Lake Balaton.